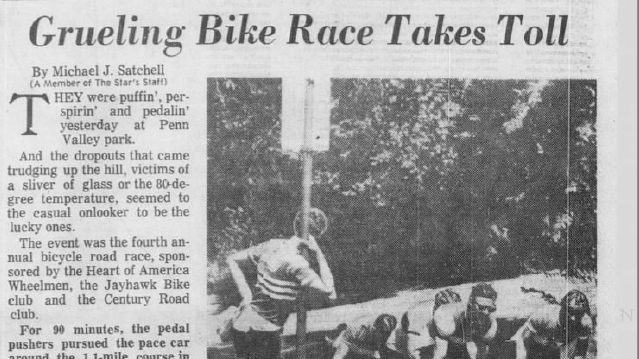 By the 4th edition of the event in 1967, the Tour of Kansas City was attracting riders from around the Midwest. Still held at Penn Valley Park, the race was held in August in the high-heat of the Missouri summer. St. Louis riders still had a stranglehold on the top podium spots. Cycling legend John Howard, who would go on to compete in the 1968 Olympics, improved on his 7th place finish from 1966 with a 3rd place finish in 1967.

The article below, from the Kansas City Star (Times), describes the 1967 event.

And the dropouts that came trudging up the hill, victims of a sliver of glass or the 80-degree temperature, seemed to the casual onlooker to be the lucky ones.

The event was the fourth annual bicycle road race, sponsored by the Heart of America Wheelmen, the Jayhawk Bike club and the Century Road club.

For 90 minutes, the pedal pushers pursued the pace car around the 1.1 mile course in the park. And gradually, the sharp curves and steep hills of Penn valley took their toll.

From a starting pack of 31 riders, 19 completed the 35-mile race. Glass on the road punctured the tires of a few; equipment failure knocked out some, but a combination of steep hills and warming temperatures accounted for a majority.

Third over the finish line was John Howard of Springfield, Mo.

To the uninitiated, bicycle racing is a thrilling spectacle.

Heads down, bunched in packs of six to 12, the riders formed a single line, slip-streaming the man in front as much as in car racing.

For the rider stuck in front of the line, it was unfortunate. Officials explained that when a rider reached more than 20 miles per hour, he expended half his energy pushing against the wind, hence the necessity of slipstreaming.

On their $250 bikes that averaged about 20 pounds in weight, the racers reached speeds of near 50 miles an hour on the downhill stretches.

It’s the uphill reaches, however, that tested a rider’s fitness. Rider David Robins of 3142 Washington street, said tests had proved bicycles racing to be the most taxing sport in terms oenergy output, with only marathon running and ootball coming close.

At the end of yesterday’s race, the riders tore off their crash helmets, and, sweating profusely, they flopped down on the grass, gulped water, gasped for breath and grimaced with the pain of their aching muscles.

“Great fun, fine race,” said one, as a casual onlooker groaned at the prospect of walking the 100 yards to the parking lot.