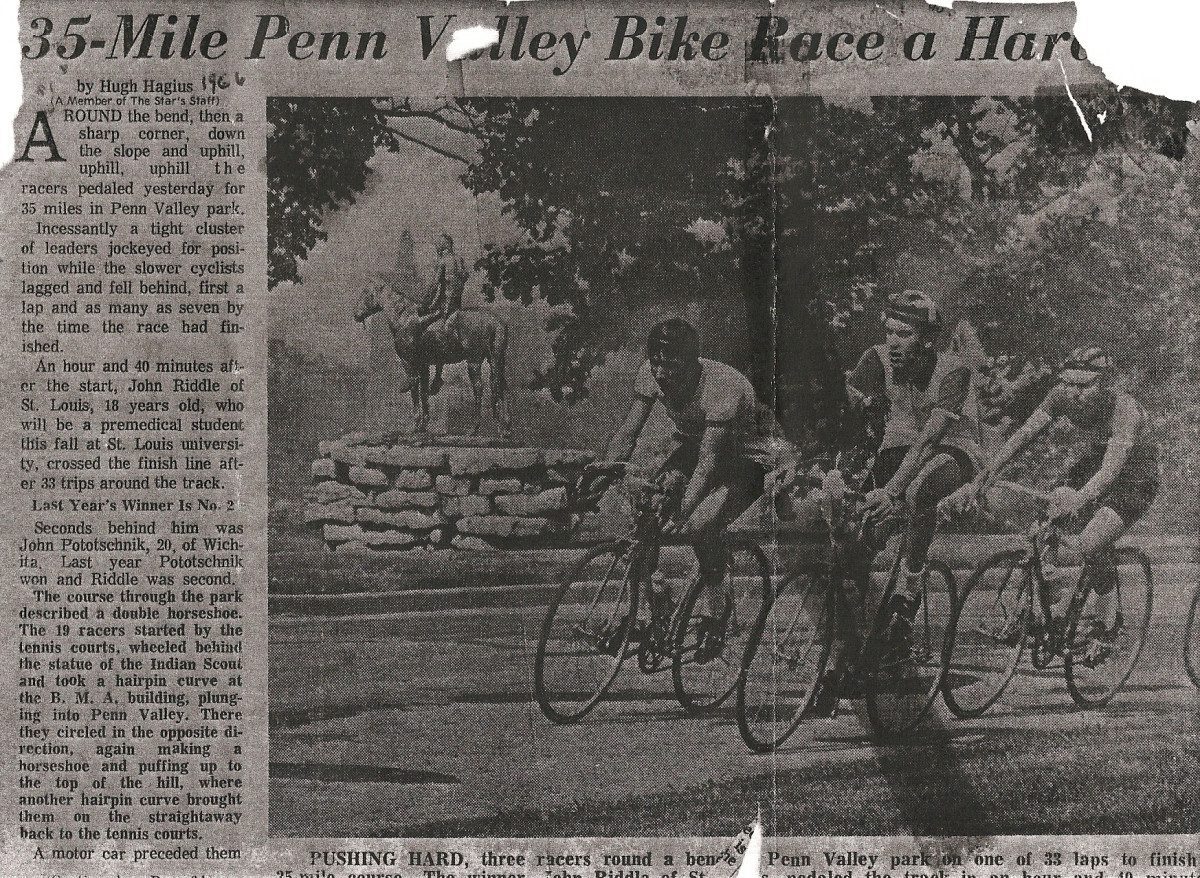 We haven’t found much information on the 2nd Tour of KC event in 1965. We do know that the first and second place winners were 19 year old John Potoschnik of Wichita, KS and 17 year old John Riddle of Saint Louis. In 1966 these two riders were 1st and 2nd again but that year, Riddle won the race with Potoschnik coming in just behind.

Here is an article from the Kansas City Times covering the 1966 edition of the event:

Around the bend, then a sharp corner, down the slope and uphill, uphill, uphill the racers  pedaled yesterday for 35 miles in Penn Valley park.

Incessantly a tight cluster of leaders jockeyed for position while the slower cyclists lagged and fell behind, first a lap and as many as seven by the time the race had finished.

An hour and 40 minutes after the start, John Riddle of St. Louis, 18 years old, who will be a premedical student this fall at St. Louis university, crossed the finish line after 33 trips around the track.

Last Year’s Winner Is No. 2 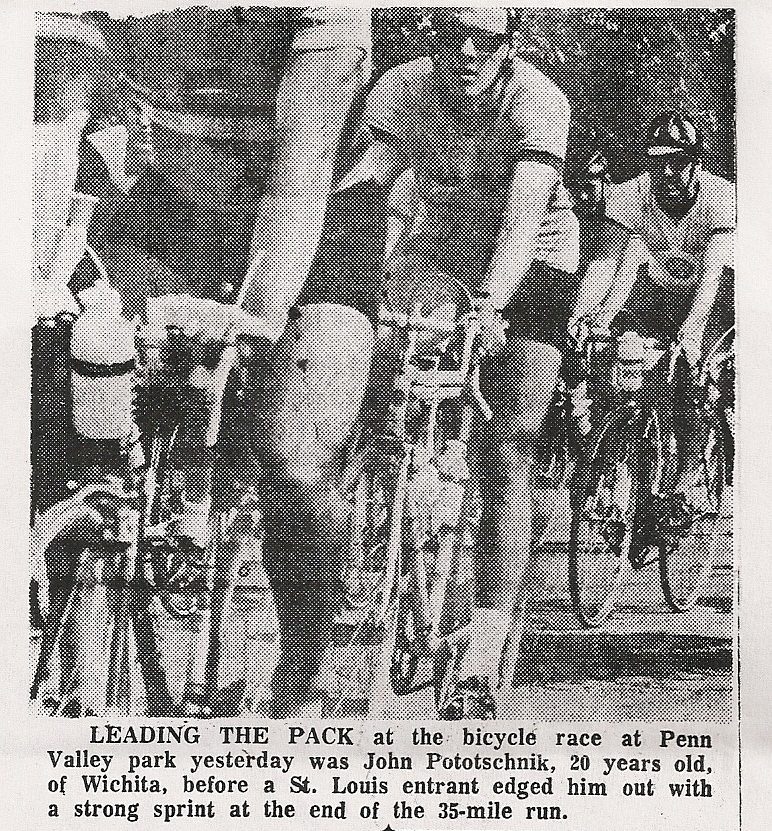 Seconds behind him was John Potoschnik, 20, of Wichita. Last year Potoschnik won and Riddle was second.

The course through the park described a double horseshoe. The 19 racers started by the tennis courts, wheeled behind the statue of the Indian Scout and took a hairpin curve at the B.M.A. building, plunging into Penn Valley. There they circled in the opposite direction, again making a horseshoe and puffing up to the top of the hill, where another hairpin curve brought them on the straightaway back to the tennis courts.

A motor car preceded them to mark which racers were in the van an which had been overtaken. The bicyclists wore jerseys and head protectors, and most rode machines with gear variations for 10 speeds.

A friend of one hot, weary contestant splashed water on him as he rounded the bend.

Easy for the Spectators

The routine of the spectators was much less taxing. About 75 were watching, many of them seated under a large shade tree. Small yellow and blue butterflies flitted over grass, and the Liberty Memorial carillon played tunes such as “Moon River” and “Beautiful Dreamer.”

The racers slowed almost to the carillon’s languid rhythm as they pushed upt he hill, but on the downslopes they reached speeds that forced the pacing car ahead  to round the sharp turns with squealing tires.

Among the spectators was Forrest G. Stith 4319 Roanoke parkway, a dedicated bicyclist at 68 years of age.

“I’m trying to promote cycling as the ideal sport for retired people,” he said. “I’ve averaged over 82 miles a month this summer since the first of May.”

Stitch took up cycling, he explained, while he was in the Air force, from which he retired as a lieutenant colonel in 1959. He bicycled in Washington, where he worked for the U.S. Office of Education before retiring (section missing) day,” he said, “but sometimes I skip a few days. IT’s a good sport for someone who wants to keep in shape. The ones who need it are the office workers. It’s an individual sport. You can go as many miles as you want to.”

At times, while the racers were out of sight elsewhere on the course, Colonel Stith mounted his bicycle and pedaled a few turns around the tennis courts.

The race yesterday was sponsored by the Heart of America Wheelmen with the co-operation of the recreation division of the city welfare department.

They also are planning an open house for cyclists at 7:30 0’clock the night of September 21 in the dining hall at Camp Lake of the Woods at Swope park. On September 25 cyclists will assemble at 2 0’clock at the boat house in Swope park for a ride.

Prizes for the Winners

The results of yesterday’s race are to be sent to the Amateur Bicycle League of America. The Day’s winners were awarded trophies and prizes by Councilman J.D. Robins, jr., whose son, David Robins, was a contestant.

The other contestants in the order they finished: